Prime Minister Viktor Orban's cabinet, citing the effects of the war in neighbouring Ukraine, loosened regulations on logging to meet increased demand for firewood as a result of surging gas and electricity prices.

• According to scientists, the deforestation of Brazil has been driven by a deliberate misinformation campaign that has systematically weakened environmental protection laws.
• It has been claimed that the research team from Embrapa Territorial (ET), the branch of the Brazilian Agricultural Research Corporation (Embrapa), a federal enterprise for agricultural research and development have used various tactics to dismantle environmental protections in Brazil, such as manufacturing uncertainty in relation to consensual science; making claims that appear as scientific facts but that contradict scientific consensus; and making false claims about scientific credentials.

Conservationists attribute the improvement of the situation to an increase in monitoring efforts, as well as greater scrutiny of palm oil producers operating in the landscape by brands and buyers with zero-deforestation commitments.

Environmental activists in Poland have complained about the resumption of logging in a protected forest. NGOs said that trees are being cut down again in Bialowieza, Europe's last primeval forest in eastern Poland. But Poland's national forest administration has dismissed the complaint and says that it is acting legally.

WWF-Russia recommends companies to not source nor use wood obtained from salvage logging, and to take additional measures to verify the legality of sanitary wood felling, such as increasing company field audits, until the risk of illegal wood from salvage logging entering supply chains has been minimised drastically.

Poland is to resume logging in the primeval Bialowieza forest.

Poland is to resume logging in the Unesco World Heritage Site Bialowieza forest, which has been ruled by EU’s top court as violating EU law (Euronews).

The UK government has proposed to introduce a new law to prohibit large business operating in the UK from using products that are from illegally deforested land as per local laws. Businesses that fail to carry out due diligence on their supply chains and make that information public would face fines. This proposed legislation will be on consultation for six weeks. Critics say that the proposal is flawed partly because the local laws on forest protections might be absent or have loopholes.

The National Forest Stewardship Standard (NFSS) for Indonesia was published recently after years of development. It applies to all types and scales of forest management, including timber, non-timber forest products and ecosystem services. It will become effective on 1 December 2020. The transition window for FSC-certified forests is twelve months and will last until 30 November 2021.

Unilever is to partner with U.S. tech company Orbital Insight on a pilot project to trace agricultural commodities sourced, especially palm oil. It claims to be using geolocation data and satellite imagery to identify the individual farms and plantations supplying the palm oil mills in its extended supply chain. The pilot project will be tested out at palm oils mills in Indonesia and soy mills in Brazil, working jointly with its established supply chain monitoring projects.

Satellite images show there were 6,803 fires in the Amazon during July, a rise of 28% compared with same month last year. It might get worse in September as predicted by the Science Director of Brazil's Amazon Environmental Research Institute. President Jair Bolsonaro, who previously encouraged agricultural and mining activities in the Amazon, banned starting fires in the region in early July under pressure from internal investors.

FLATPÅCKED FÖRESTS: IKEA’s illegal timber problem and the flawed green label behind it

This report by independent environmental charity Earthsight finds illegal logging in FSC-certified supply chains in Ukraine. Focussed on the Carpathian forests, it found around 100 sites are being felled illegally each spring, when silence periods should protect several endangered animal species including brown bears, wolves and Eurasian lynx. While regulations require Environmental Impact Assessments (EIAs) before sanitary felling is conducted, no EIAs were found to have been carried out. Evidence sited by Earthsight includes the Ukrainian State Environmental Inspectorate (SEI), local environmental organisations, and research commissioned by WWF Germany.

Earthsight claims this illegal logging has not been picked up in FSC audits because of systematic issues with FSC that go beyond Ukraine: conflicts of interest as auditing bodies are paid by the logging companies they certify; inadequate oversight by Assurance Services International (ASI) which should be holding the auditing bodies to account but is argued to have failed to do so. The report documents a wide array of cases where FSC-certified firms have been accused of illegal logging, clearance of High Conservation Value (HCV) forests, and human rights abuses from all over the world – including in places such as Brazil, China, Congo, Indonesia, Peru, Romania, Russia, Ukraine. Earthsight highlights that FSC has only investigated 13 companies in its 27-year history – 0.02% of the more than 44,000 it has certified.

In response, FSC states it is fully aware of the issues in Ukraine, and insists that whenever illicit acts are identified or reported they are investigated. IKEA says it has started its own investigations, commissioned audits from a 3rd-party independent audit company, asked questions to ASI, and pledges that if any illegal wood is indicated in its product it will take immediate action.

Earthsight’s report focuses on IKEA because, as the biggest buyer of wood in the world, it has the most influence to drive positive change. However, the issues found by Earthsight apply to the publishing industry as much as they do to IKEA. Therefore, the Book Chain Project will further look into Earthsight’s findings and update you as soon as we decide what further action to take.

Timber from unsustainable logging allegedly being sold in EU as ethical

According to an investigation by the environmental charity Earthsight, in the area of forest - Velykyi Bychkiv within Ukraine, loggers appear to be taking advantage of loopholes that allow for “sanitary felling” during the silent periods in the spring and early summer from 2018 to 2020. Some of the wood in question is found in the supply chain of Swedish furniture maker Ikea, who denied wrongdoing and immediately began their own investigations into all parties mentioned in Earthsight’s report. 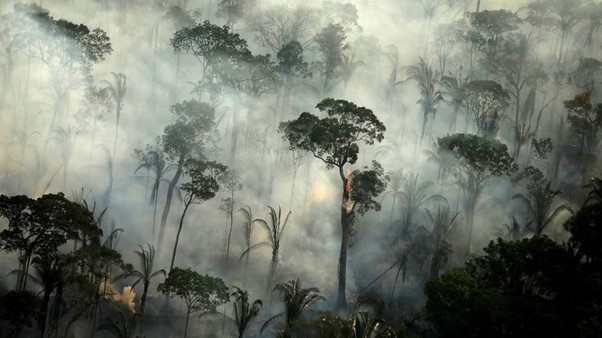 Indonesia’s environment ministry will file civil lawsuits against five companies in connection with fires that razed their concessions last year. Fire season in 2019 burned an area half the size of Belgium and released double the amount of carbon dioxide as the fires in the Amazon. Officials say they are preparing both civil lawsuits — seeking fines against the pulpwood and oil palm firms blamed for the fires — and criminal charges. However, a spate of recent cases suggests the government will have a hard time getting the money, with only a tiny fraction paid out of the $231 million awarded from nine companies in similar lawsuits.

UK to lead global fight against illegal logging and deforestation

The UK is to spearhead a major global crackdown on illegal timber and deforestation, with plans to form a coalition of developing countries against the trade as part of its hosting of crunch UN climate talks this year. All countries are expected to come forward with tougher plans to reduce global emissions as part of COP 26, and experts have said this will only happen if the UK takes the lead in forming a coalition of small and big developing countries, including forested African nations and Indonesia, as well as major economies such as the US, China, India and the EU. Offering assistance to developing countries, in the form of finance and technical expertise, will be vital to that effort.

CDP’s annual A List names the world's most pioneering companies leading on environmental transparency and performance. This year, more than 200 corporates are recognized as leading on Climate Change, Water and Forests. UPM-Kymmene Corporation was one of only 8 companies to achieve the Forests A list in the latest round of CDP disclosures. The other leading companies are: Unilever plc, TETRA PAK, L'Oréal, HP Inc, FUJI OIL HOLDINGS INC., FIRMENICH SA, and Danone.
Read more about the Forests methodology here.

This speech by Brian Schatz, Senator from Hawaii (D) was part of the World Economic Forum Annual Meeting held in Davos-Klosters, Switzerland, 21—24 January 2020. Seeing that half of tropical deforestation is illegal, illegal and unsustainable timber and goods are flooding global markets. Voluntary commitments cannot achieve zero-deforestation without regulation. Regulation is one of the key drivers of sustainable forestry. This year, Schatz will introduce legislation that will make it illegal for companies to import the products of illegal deforestation.

Threatened by deforestation, Cambodia loses 26 per cent of its forests in 43 years

Growing demand for timber as construction material, fuel and charcoal is devastating Cambodia's forests. In 1975, forests covered 73 per cent of the country’s surface; last year it was down to only 46.84 per cent. Cambodian government has recognised the importance of forests and extended the natural protected area, under the Cambodian Environment Ministry, to 7.2 million hectares – the equivalent of 41 per cent of the Kingdom’s land surface.

China, the world’s largest timber importer, issued a new draft of its first Forest Law update in 20 years that adds a prohibition on buying illegally sourced timber. It will be effective on 01 July 2020. Issues around enforcement, such as the burden of proof being on government departments, traders being out of scope, and low penalties, remain.
Please find more details about the law here. (EH&CH)
P.S. Recently, we attended an APEC region workshop hosted by APEC Expert Group on Illegal Logging and Associated Trade (EGILAT) in Malaysia on forest law governance. This table captures the major and emerging forest law regulations in the region.

Metsä Group's Äänekoski mill in Finland now calls itself a ‘bioproducts mill’ as it makes paper and wood for recyclable drinks cartons, clothing and building materials. They re-use the chemical additives and by-products of the production process to make sure they are not wasted. They also deploy drones to digitally map the forest area so they can monitor trees using a mobile phone app and then arrange remotely for contractors to thin or harvest an area when the trees look ready. For more information, please visit Metsä Group's website.